It began when Reb Chaim, then a young kollel student, decided to help a family so destitute they couldn’t afford toothbrushes. And it became an empire of caring, with more than 90 volunteers searching for people in need — and finding a way to help them. And at the head of this empire of compassion, responsible for literally millions of dollars and the lives of tens of thousands of people, stood this humble man, the Chicago native who became one of the greatest gaba’ei tzedakah of our generation.“

“We look for tzaros,” his associate once said. They traveled the length and breadth of Eretz Yisrael, searching its nooks and crannies for the impoverished widows and orphans, the sick man who needed expensive treatment, the kollel family with no funds to marry off their daughters, the convert who’d just lost his job. They looked; they found; they helped; and they rescued. They supplied rent money, heaters, medicines – and hope.

Reb Chaim transformed and improved the lives of countless people, and this masterly biography by bestselling author Rabbi Yechiel Spero will transform and improve our own lives as well. 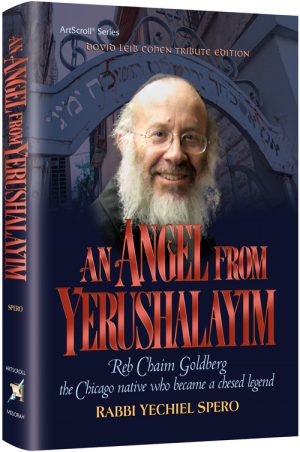