For five generations of the Talmudic era, the great Sages of the Land of Israel flourished in the Galil. There, like the Sages of Babylonia, they debated, expounded, and applied the laws and principles of the Mishnah that were received at Sinai .The sacred learning of those years was gathered in the Talmud Yerushalmi ù The Jerusalem Tamud.

They lived with Roman pogroms and persecution ù but the flame of Torah burned bright despite it all. Until about 350 C. E., when brutal Roman anti-Semitism decimated the Holy LandÆs yeshivos and silenced its voice of Torah. But the SagesÆ teachings live on in the Talmud Yerushalmi, just as the teachings of Babylonia live one in the Talmud Bavli ù The Babylonian Talmud.

But while the Sages of Babylonia had another 150 years to redact, clarify and organize the text of the Babylonian Talmud, Roman persecution in the Holy Land made that impossible. Thus, the Jerusalem Talmud is exceedingly difficult, and ù despite its great significance û it has been a closed book to all but select, elite scholars.

Now, thanks to the outstanding scholars who produced the classic Schottenstein Edition of Talmud Bavli, the lock is being removed on yet another treasure-house of Torah ShebÆal Peh, the Oral Law.

This project has been enthusiastically welcomed and endorsed by Torah leaders in Israel and America. 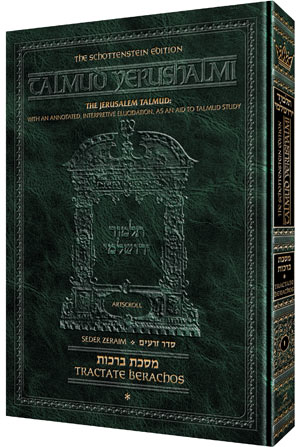