Israel Cohen was a prisoner in a slave-labor hell during the Holocaust. More than once the thought that he was a footstep away from the end, but he was destined to survive – to start a new life, raise a proud family, and share his experiences with us. And his experiences are truly a gift, because Cohen is a man with a heart and an unshakable faith. His articles, some of which are included in this book, have appeared in religious and secular publications in the United Stated and Canada.

We pick up any book about the Holocaust with hesitancy and trepidation, but we put down Destined to Survive with gratitude that such a man was willing to share his experiences with us.

Herman Wouk an admirer of the author, has contributed the Foreword. 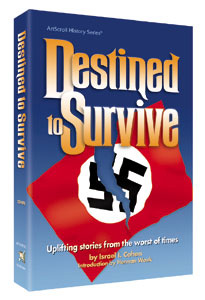