View cart “Let There Be Time (Hardcover) By Shaya Winiarz” has been added to your cart.

Let There Be Time (Hardcover) By Shaya Winiarz

The Meaning and Messages of the Jewish Months

Bereishis – in the very first moment of time that was ever created, bara Elokim es hashamayim v’es ha’aretz – Hashem created the heavens and the earth. (Malbim)

Have you ever realized that time is something that was created? Just as Hashem created all that we see, so too did He create zman-time. Hashem’s world is run by the many rules of nature which He put in place, including the laws of time. Zman, while invisible, is a set of laws which govern the physical world just like all the other laws of physics.
Just as no two laws of physics are the same, no two months are the same. Just like gravity affects the earth differently than electro-magnetism, so too Sivan impacts the world differently than Tammuz. And just as one would never equate a ram with a bull, due to the uniqueness of each animal, a Jew’s service of Hashem shouldn’t be the same throughout the year but should reflect the distinctions of each month.
Culling from the Gemara, Midrash, and Rishonim, as well as later sources like the Arizal, Pri Tzaddik, and Bnei Yissaschar, Let There Be Time provides fascinating insights into the topic of segulas hazman-how each month differs from the next. Distilling difficult and esoteric ideas into clear and concise English, this book will bring you on a journey on which you will gain an understanding of the deep concepts contained in the Jewish calendar months, and what Hashem wants from us during each and every one of them.
Category: Uncategorized 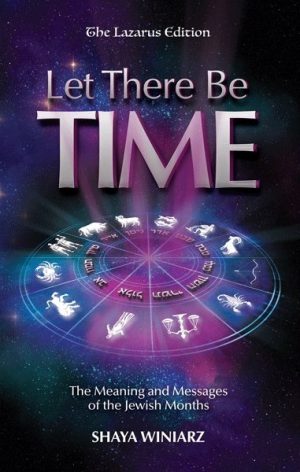 You're viewing: Let There Be Time (Hardcover) By Shaya Winiarz $22.95
Add to cart
X