Who was Pharaoh of the Bible?

A common scholarly identification for the Pharaoh of the Exodus is that of Ramesses the Great, from the 19th Dynasty of Egyptian kings. This is primarily based on the verse in Exodus 1:11 that describes the Israelites building the store-cities of Ramesses during their years of oppression.

However, this identification poses problems. It does not fit in with the number of years stipulated by the Bible between the Exodus and the construction of the Second Temple by Darius the Great, the Persian monarch and ruler of the 27th Dynasty in Egypt. Furthermore, over the last couple of decades, archaeologists and researchers have uncovered a wealth of evidence contradicting this identification.

Another baffling problem is that traditional Jewish dating sets the beginning of the Egyptian Dynastic era at circa 2000 bce, whereas the painstaking analysis of conventional chronologists yields a date of circa 3000 bce.

In this fascinating study, author Rabbi Alexander Hool (The Challenge of Jewish History, Mosaica Press, 2014, and Searching for Sinai, Mosaica Press, 2017) draws on fascinating research from many different disciplines as well as startling astronomical evidence to establish the convergence of a new Egyptian chronology in line with traditional Jewish dating.

In addition, the path of investigation yields a surprising and penetrating insight into the setting of the Exodus, and this results in the contraction of Egyptian history by— incredibly—almost a thousand years! Rabbi Alexander Hool learned in Gateshead Yeshivah and has been part of the Ponevezh Yeshivah and Kollel for over twenty years.

An eminent scholar, he has developed a particular expertise in history, dating, mathematics, and other unique and intriguing subjects. His earlier works, The Challenge of Jewish History: The Bible, the Greeks, and the Missing 168 Years (Mosaica Press, 2014) and Searching for Sinai: The Location of Revelation (Mosaica Press, 2017), have been Jewish bestsellers and have received wide acclaim. 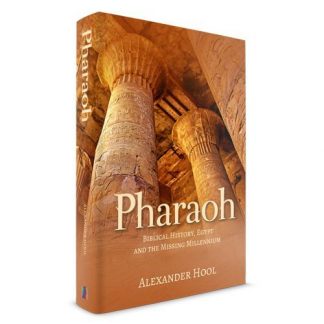