Raised in St. Louis in the 1920s, a city with few resources for Torah learning and even fewer b’nei Torah to serve as role models, Yaakov Moshe Kulefsky seemed an unlikely candidate for Torah greatness.

And yet that is exactly what he achieved.

Noted author Rabbi Yechiel Spero brings to life this brilliant, devoted and humble gaon. We follow Rav Kulefsky zt”l as he learns Torah in St. Louis and Chicago, in Brooklyn and Monsey, and even on an American army base where, drafted unfairly, he managed for 18 months to learn and keep the mitzvos. Finally, his wanderings come to an end in Yeshivas Ner Yisroel where, for nearly half a century, he did what he loved, and did, best — learning Torah, sharing Torah, and teaching Torah in a variety of positions, including rosh hayeshivah — and doing it all with geshmak!

Rav Kulefsky never learned in the great yeshivos of Europe, but their influence shaped his life. He served as a kind of bridge between them and a new breed of talmidei chachamim — American boys, growing up on baseball and hot dogs, but at the same time infused with a desire to become authentic bnei Torah. It was a bridge paved with ahavas Torah and an endless love for his talmidim, many of whom went on to become mechanchim, rabbanim, roshei kollel and roshei yeshivah throughout the world.

World-class poskim turned to him for guidance. World-renowned roshei yeshivah gleaned from his vast knowledge, and expert mechanchim asked his advice. Yet he ran away from honor, happy to be a simple teacher of Torah.

He was lofty, down-to-earth, and normal, said one talmid, describing his rebbe, while another, now a rosh yeshivah, told Rav Kulefsky’s grandchild, When [a person] spoke in learning with your grandfather, it was like watching a kid in a candy store.

Open this book and meet that kid in a candy store, who understood so well the sweetness of Torah, and who shared that sweetness with thousands of talmidim. 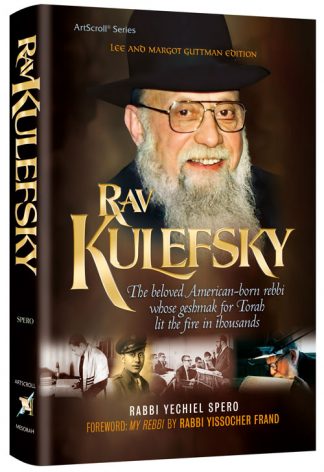