“Reb Moshe” – for the nine decades of his life, these two words were synonymous with Torah greatness, encyclopedic knowledge, compassion, generosity, piety, humility, faith, and countless other precious, sacred concepts.

During his five decades in the United States, Rabbi Moshe Feinstein was Rosh Yeshivah of Mesivtha Tifereth Jerusalem and its resident branch, the Yeshivah of Staten Island. It was to Tifereth Jerusalem on the Lower East Side that people came by the thousands with their questions and problems. His study table in the beis midrash was the address of queries coming from all four corners of the earth. He was the court of last resort for virtually all the world’s leading halachic authorities.

And it was in Reb Moshe that every aching heart, every troubled soul, found wisdom and comfort.

A generation ago, ArtScroll/Mesorah’s Reb Moshe by Rabbi Shimon Finkelman,became an instant classic. It changed people’s lives, literally. Now, in honor of the Rosh Yeshiva’s 25th yahrzeit, Rabbi Finkelman has greatly expanded the original volume with scores of new anecdotes drawn from interviews with people whose lives were touched by the Rosh Yeshivah. It contains new documents and material culled from articles published over the last quarter of a century. Dozens of new photos, many of them never before published, enhance this magnificent volume. This is a new book in a very real sense. It shines an even sharper light on Reb Moshe’s life, his awesome greatness in Torah and superlative character.

Reb Moshe was that rarity among human beings: the better one knew him, the more one stood in awe of his spiritual grandeur, his incredible wisdom, his boundless kindness, his unshakable faith. This book ushers us into his aura of greatness and purity. We want to read it and reread it – again and again, – and share the stories with dear ones.

In a world of moral squalor and degraded ethics, we long to touch the great and holy tzaddikim of the past. In this book, we do it! – and we will go away inspired to emulate the life of a humble giant named Rabbi Moshe Feinstein. 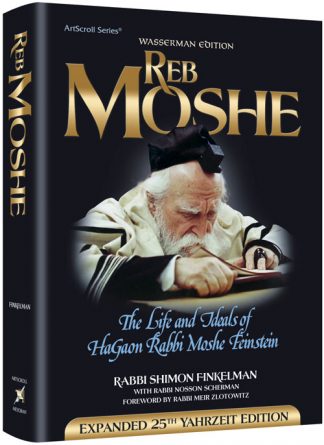