A. Romi Cohen was a precocious, active 10-year old when the Nazis invaded Poland. Soon afterward, they and their puppet regime took over his native Czechoslovakia, and for the next five years he was a hunted fugitive and a valiant fighter with the partisans. This memoir is a roller coaster of excitement and emotion, as young Romi is separated from his mother, risks his life to save his father and others, crosses borders, flees for his life with bullets flying all around him, races through Budapest desperately trying to save his father from Auschwitz, turns and fights, is inducted into the partisans, and participates in successful battles against the Nazis.

Finally – after many terrifying excapes from death – Romi is reunited with his father and sisters!

If this were a novel, it would be unbelievable. But it happened! Every word of it. A. Romi Cohen was the rare Jew who turned from fugitive to hero – and with Dr. Leonard Ciaccio, he tells his story. It is an adventure like few others.

There are no reviews yet.

Only logged in customers who have purchased this product may leave a review. 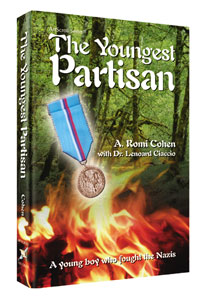 You're viewing: The Youngest Partisan $22.24
Add to cart
X